If you have traveled on Hwy. 190 east of Walker in the last few months and happened to glance towards the building for Walker Metals, you might have noticed a statue about six feet tall on the side of the business facing the highway. Maybe you’ve fleetingly wondered what it was as you passed it by.The statue is a memorial to all U.S. fallen soldiers. The idea was conceived by Bob Estave,owner of Walker Metals, sometime in 2014 after hearing in the news about the mistreatment of veterans by the Veterans Administration. Estave talks about the origin of the memorial somewhat reluctantly because he doesn’t want to call attention to himself.

“I didn’t do this for credit,” he said. “I just want people to remember and honor our veterans.The freedom we enjoy today is because our armed forces are on watch 24/7, 365 days a year, even on holidays. We (he and his family) wanted to do something unique in the community for our veterans, and especially to remind the younger generations about the debt we owe our veterans. Kids don’t understand that people died for our freedom, in World War I, World War II, Korea, Vietnam and now in Afghanistan and Iraq. I did this as reminder to people that the reason we are free to travel anywhere across this great country and don’t have check points at state borders is because of the sacrifices of the American armed forces who fought to keep our country free.” Not everyone notices the statue or realizes what is, but it has caught the attention of veterans.Many of them have stopped to look at it and ask permission to take photos beside it. Estave always says yes and also deflects any thanks directed at him by explaining that he didn’t do it by himself.

"We purchased this bronze sculpture, titled 'The Fallen Soldier', and had lined up someone who volunteered to build the base and install it for us for free, but by the time we ordered it and it was delivered earlier this year, we were in the middle of so much bad weather that our guy couldn’t pour any concrete, and when it did get dry, he was so backed up with work that he just didn’t have time to do it,” Estave explained.“Sometime in June,” he continued, “I showed the sculpture to former Walker Mayor Bobby Font and asked if he knew of anyone who might help erect it. Bobby said he knew some people and that he would be proud to see that it gotdone.”

By coincidence, a few hours later, a man who was a veteran and member of the Military Order of the Purple Heart came into the business, and Estave showed it to him. The man said the Purple Hearts would be proud to mount it. Estave recounted his earlier conversation with Font and suggested they get together – which they did.

Font said, “When Mr. Bob (Estave) asked me about it, I didn’t hesitate. First of all, he is a wonderful person, a great citizen, a hardworking business man, and he has always been supportive of me, and I was glad to be able to help him. I think it’s important that we continue to remember our veterans, particularly those that pay the ultimate sacrifice. I made a couple calls and got the concrete and bricks donated. I got a few friends, and we got together with the Purple Heart guys and got started on the construction on June 16.”

Estave said, “Before I knew it, several of them were here working together, and the concrete base was put down, and a few days later the brick section was laid. There must have been 10 to 12 Purple Heart veterans who came out the last week of June when the sculpture was mounted.” With the four-foot sculpture added to the base, the memorial, which features a pair of empty boots with a helmet resting atop a propped up rifle, overall stands about six feet high.

Font said, “I feel extremely honored to be part of this project. I am equally as honored that Mr. Bob would entrust me with the construction of such a special tribute.” Estave added, “I’ve been told it’s very rare for a memorial like this to be put up on private property, but I haven’t checked that out, and I haven’t publicized it This is just for our vets. I feel that Congress made a promise to take care of them and then violated that promise, and I just want to tell our veterans, ‘thank you,’ and to show that our fallen heroes haven’t been forgotten.” Next time you pass Walker Metals, especially on Nov. 11, Veterans’ Day, take a moment to remember. 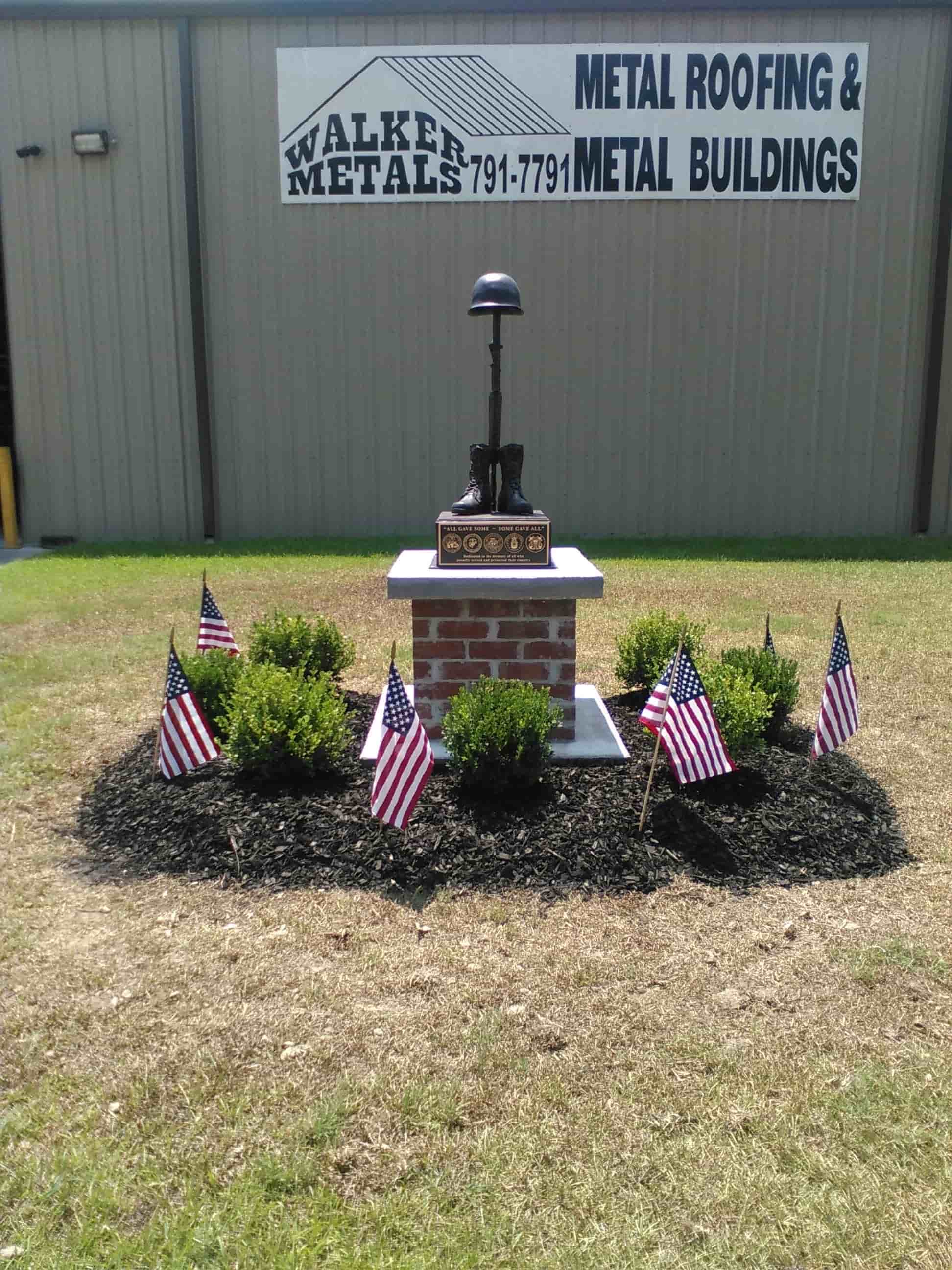 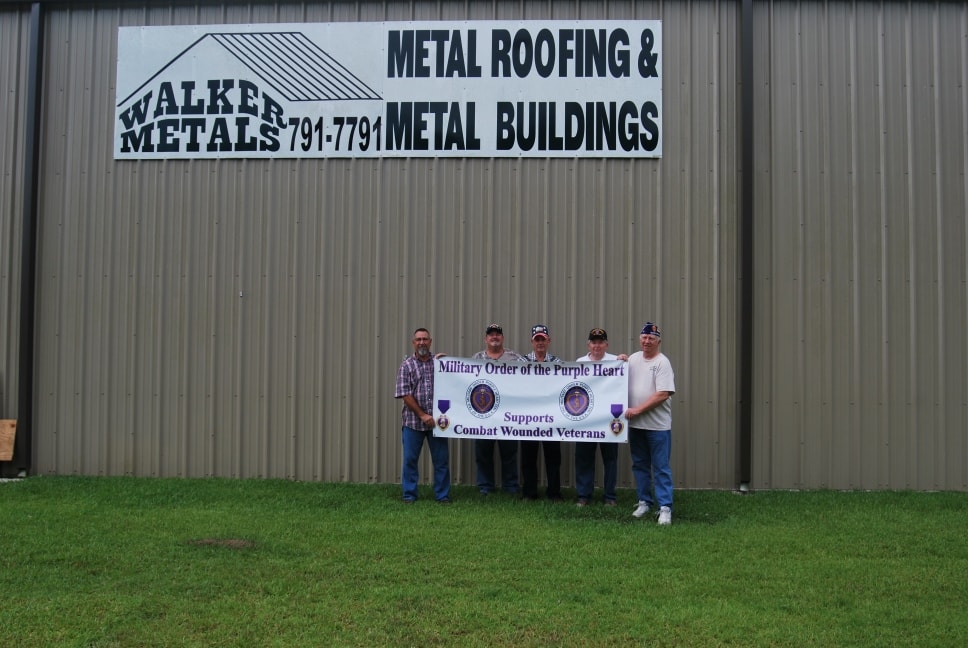 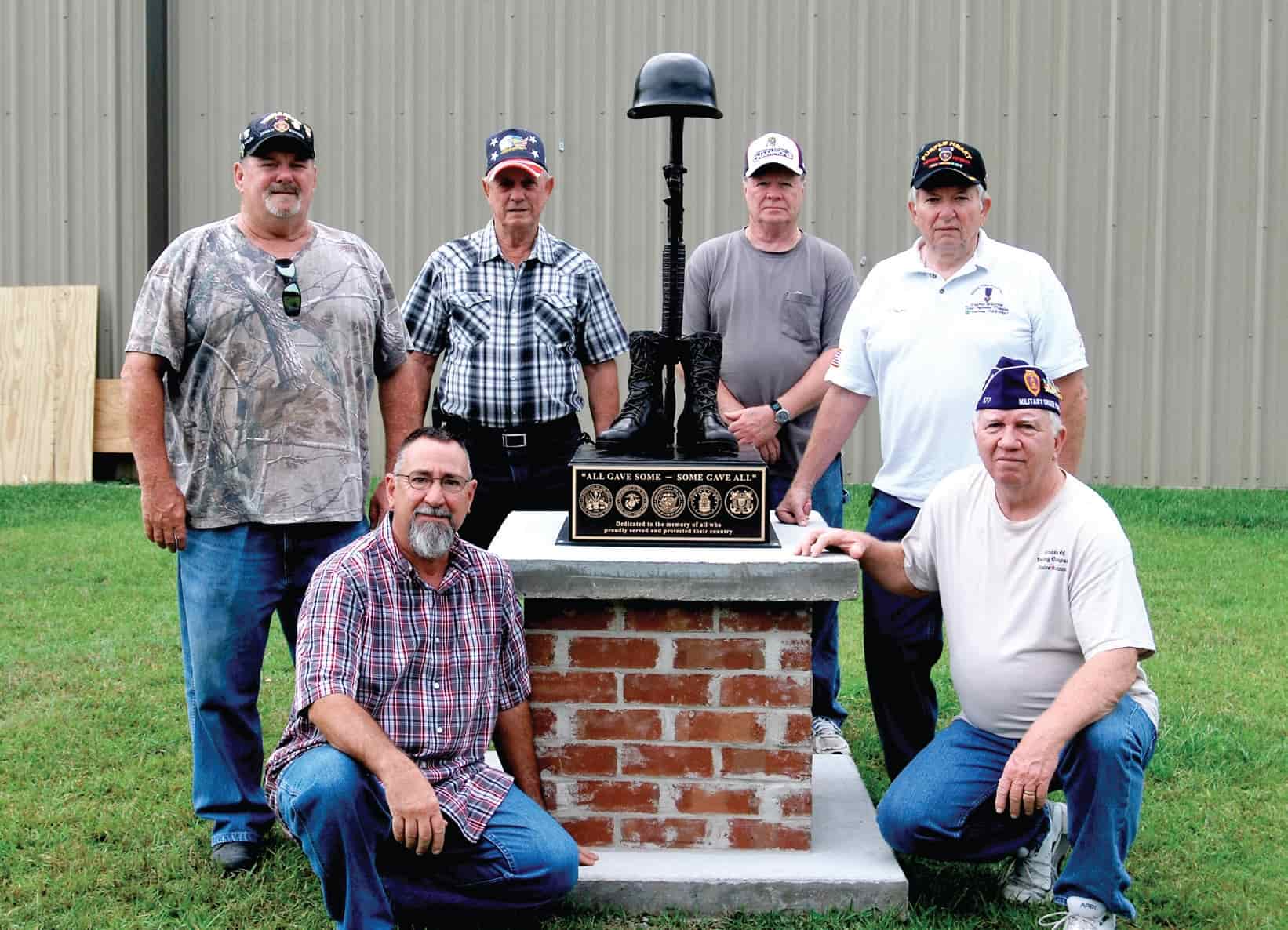